‘Everyone in Cowal should be pleased today’

After years of debate, ‘that rock’ at Hunter’s Quay now has a new identity – Puffin Rock.

The move to redesign the former Jim Crow Rock began after a number of people reported taking offence at the name and previous ‘golly’ design of the landmark.

It was getting the area a bad name, regardless of the local history of the name.

The vile Jim Crow laws in the USA made racial segregation and discrimination legal in certain states, and ‘Jim Crow’ was a term of racial abuse in some states.

As travel became more global, an increasing number of vistors were taken aback by a rock which, to those not aware of the local history, seemed to be a racist totem.

In 2017 Neville Lawrence, whose son was murdered in a brutal racially motivated attack in 1993, told the Dunoon Observer he was “really disappointed to see such a thing” during a recent trip to Argyll and Bute.

He told the paper: “I have been coming to Scotland for many years, and since my son was murdered. Before that I was part of the campaign to release Nelson Mandela which brought me there many times. There was a large group of us, 14 or so, who went into a pub in Glasgow.

“Nobody stopped and stared, it was very welcoming, and so when I returned to London I would tell people how different it was. I always look forward to coming to Scotland.

“I find it very disappointing that there is this thing that makes people feel very uncomfortable.

Mr Russell used his offices to facilitate meetings and agreements between interested parties, and those for and against redesign.

As a result of the series of meetings Dunoon Grammar School was approached, and the school’s art department agreed to run a competition for a new design and to paint the rock when a winner was chosen.

After a very popular public vote Alex Fraser’s puffin design was chosen by public vote – but plans to paint the rock had to be put on hold because of the pandemic.

Then, this week, the paint went on the stone – and Puffin Rock was born.

“This final part of the project was made possible by John Kelsall who painted the undercoats in preparation for today’s paint, alongside.

“Also thanks to Iain Hurrel who donated the marine paint, to make this a lasting project.” 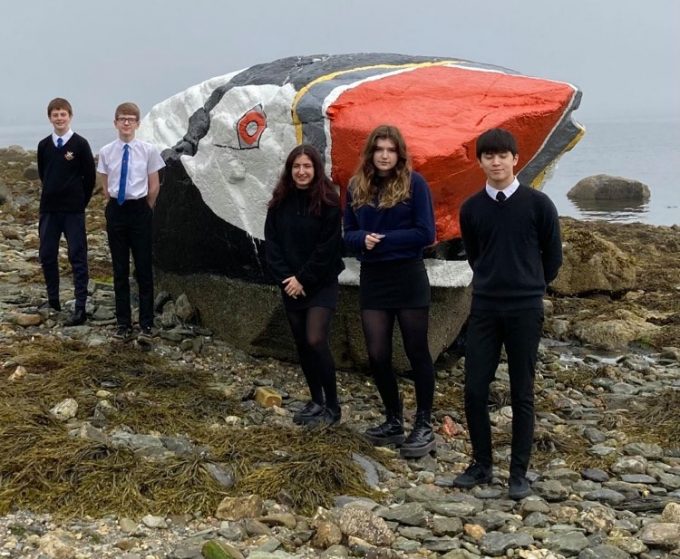 Speaking on behalf of the two Johns, Mr Farrell said: “We think that Dunoon’s young people have done a wonderful job coming up with fresh ideas for a new design and helping to paint ‘The Puffin’.

“We hope that this fun landmark will be enjoyed for generations to come.”

Michael Russell said: “It has been a long haul but huge thanks are due to those who started this process – and particularly the ‘two Johns’ as they have become known – by refusing to accept that the ‘Jim Crow’ rock had any place in a modern Scotland, whether or not the name and the painting were accidental, former Moderator Rev Lorna Hood who facilitated the first difficult steps, to everyone who helped devise the competition to rename and repaint, to the winner and to the super talented Dunoon Grammar team supervised by Lucy Neish and supported by the gift of paint from Iain Hurrel’s Marine Blast, who made it happen.

“There now needs to be work done on an interpretation board which tells this inspiring story and on getting the ordinance survey to recognise the new name – but all this demonstrates how good things can happen in communities if there is a determination to change and an enthusiasm to see a project through, no matter how difficult.

“Everyone in Cowal should be pleased today.”